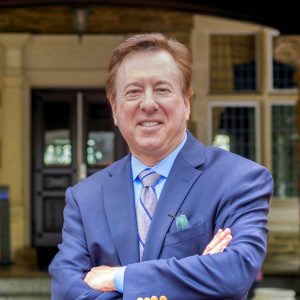 Steve Highsmith is Vice-President of Institutional Advancement at Cabrini University in Radnor, Pennsylvania. He leads a department working with staff, faculty, students, alumni, trustees and the wider community of citizens to raise awareness, friendship and fundraising to achieve the mission of Cabrini.

He is former Director of Community Relations and Local Programming at PHL17-TV, producer and host of PHL17’s “In Focus” program, and host of special projects, such as election specials and the annual Mummers Parade on New Year’s Day. Steve has broadcast the parade for more than 20 years and continues to do so.

Steve has been on the Philadelphia news scene since 1981, first serving as morning news anchor and news director of WCAU Radio(CBS) and news anchor of the NJN Nightly News before joining “Inquirer New Tonight” on WPHL-TV in 1994 as chief political correspondent and anchor. He also served as NBC10 political correspondent and host of NBC10@Issue from 2005 to 2013. His reporting credits include the Reagan-Gorbachev Summit, several national political conventions, and the visit of Pope Francis to Philadelphia.

He has been honored by the National Association of Television Arts and Sciences, the Associated Press, the Radio and Television News Directors Association and the Pennsylvania Association of Broadcasters. In 2011, Steve was inducted into the Broadcast Pioneers Hall of Fame. He is also an inductee of the Philadelphia Mummers String Band Association Hall of Fame. Active in the community, Steve serves as Treasurer of the Mummers Museum Board of Directors. He is also a member of the Board of Directors of CADEkids and Love The Mummers. He is a former member of the Boards of the Boys and Girls Clubs of Philadelphia, United Cerebral Palsy of Philadelphia, and the Greater Philadelphia Cultural Alliance, as well as a former member of the Cabrini University Board of Trustees and the Board of Governors of the Mid-Atlantic Chapter of the National Academy of Television Arts and Sciences. Steve also has been involved in supporting other community and nonprofit efforts, such as the Philadelphia Children’s Alliance, Inn Dwelling, and Special Olympics.