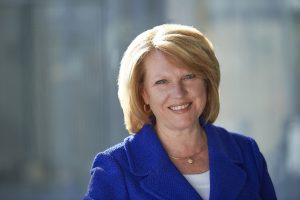 Madeline Bell is the President and CEO of Children’s Hospital of Philadelphia (CHOP), one of the top-ranked children’s hospitals in the United States. In this role she oversees 14,000 employees in the Hospital’s $2.6-billion-a-year health system and research institute. Prior to being promoted to CEO in July 2015, Ms. Bell served as CHOP’s Chief Operating Officer for eight years. During her tenure as COO, she led significant growth while maintaining the financial strength and clinical excellence of the organization.

Ms. Bell began her career as a pediatric nurse at CHOP in 1983, later leaving the organization to move into hospital administration. She returned to CHOP in 1995 to lead Home Care and Case Management, and has since held a number of leadership positions, advancing from Vice President to Senior Vice President to Executive Vice President to Chief Operating Officer. In 2015, she assumed the title of President and CEO.

A mission-driven leader who is nationally recognized for hospital operational management, Ms. Bell has made numerous contributions to CHOP, including the development of one of the largest pediatric ambulatory networks in the country, the implementation of a single-platform electronic health record, the expansion of the Hospital’s 4-million-square-foot campus, and the development of many nationally recognized clinical and family-centered care programs. She has also secured many philanthropic gifts to help further the institution’s mission. Throughout her career, Ms. Bell has been a champion for cultural change and patient safety at CHOP. Her background in patient care has given her a deep appreciation for the clinical world, and she always stays focused on improving care for children.

A longtime mentor for aspiring leaders, Ms. Bell makes diversity and inclusion a top priority by leading initiatives that support growth opportunities for underrepresented individuals at CHOP and throughout our community. She also authors the blog Heels of Success (heelsofsuccess.com), offering guidance to ambitious women on how to elevate themselves in the workplace, balance the demands of work and family, and pursue their ideal careers. She created the blog to address many of the questions young women have about achieving success in their careers – and she hopes that it will ultimately lead to greater representation of women in the C-suite and on boards.

Ms. Bell is the Chair of the Children’s Hospital Association, for which she has served as a board member since 2012. She also serves on the boards of Comcast, the Leonard Davis Institute of Health Economics, and Solutions for Patient Safety. In addition to her board positions, Ms. Bell serves as Chair of the Economic and Community Advisory Council for the Federal Reserve Bank of Philadelphia and also serves on the Villanova University College of Nursing Board of Consulters and the Greater Philadelphia Chamber of Commerce CEO Council for Growth. She is an adviser to numerous international hospitals and frequently lectures on the topic of children’s healthcare. She previously served on the boards of the Schuylkill River Development Corporation and the University City District. In 2017, she was named one of Modern Healthcare’s “100 Most Influential People in Healthcare.”

Ms. Bell is a native of the Philadelphia area. She holds a bachelor of science in Nursing and an honorary doctorate in Humane Letters from Villanova University, as well as a master of science in Organizational Dynamics from the University of Pennsylvania.

PJM has a long history of partnership with United Way of Greater Philadelphia and Southern New Jersey (UWGPSNJ). During their 2016-17 workplace campaign they collectively raised more than $295,000 in employee and corporate contributions. 68% of that impressive total raised was donations to United Way’s Impact Fund, supporting our work to end intergenerational poverty across our region.

PJM’s annual workplace campaign exemplifies an openly engaged and passionate workforce. The culture of giving is pervasive across the company.  A wonderful example is the exciting and well attended agency fair they hosted this year. This advocacy opportunity provides United Way Impact Partner organizations the chance to expand their outreach and demonstrates the unique role United Way plays as partner and convener across the nonprofit sector.

Beyond the funds raised in PJM’s annual campaign, their leadership has made a commitment to bolster their giving to the Impact Fund. Each year, they provide a dollar-for-dollar match to the programs that allow United Way to continue driving Impact across our diverse region. This match expands our resources as we face down the threat of poverty in our homes, neighborhoods and communities, we pave the way for more high school graduates, strengthen our workforce, and build a healthier population that is able to reinvest in our communities.

Aside from financial support, PJM is also a large proponent of employee engagement. They encourage year round service to the communities where their employees live and work. Thousands of volunteer hours have been logged by PJM volunteers working side by side on projects that reflect their values and enhance and support their communities. Such efforts continue to set PJM apart from other organizations and mark them as a wonderful corporate partner.